Submitted by Derek and Stacey in honor of their beloved Shnuffy.

Shnuff: The Measure Of All Things Good

Newly married and with a new home, we decided to adopt a puppy.

Little did we know that our “family” would become a “farm-ily.” And Shnuffy (shnoo-fee) would make it so.

We wanted a mellow dog so we chose the puppy that seemed the most ‘laid back’. It was little Shnuff cowering in the corner of the cage. We soon learned that her calmness was due to kennel cough and after a series of antibiotics became a very crazy little puppy!

“Noo EEE! Noo EEE!” from local neighborhood kids, Shnuffy was everything good and fun. Our definition of LOVE.

I often wonder what happened to Shnuffy’s litter mates? If I only knew then what I know now, I would have found safe havens for them all.

Stumbling to her feet when she heard Derek’s voice, trying with all her might to stand even when her legs would not support her, she was a painfully beautiful gift of love that sustained our life then and even now.

Shnuffy remains the measure of all things good. “I love you a million Shnuffys!”

Sign Up Now
For Email Marketing you can trust. 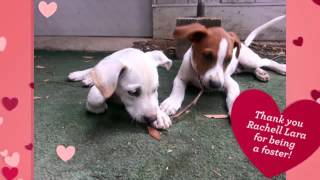